Neely Guitars is a Gold Warranty Service Level-certified custom guitar shop that offers guitar restoration, repair, and customization services. Our founder is factory-trained to work on top-name brands of guitars such as Fender, Taylor, Guild, Gibson, and more. 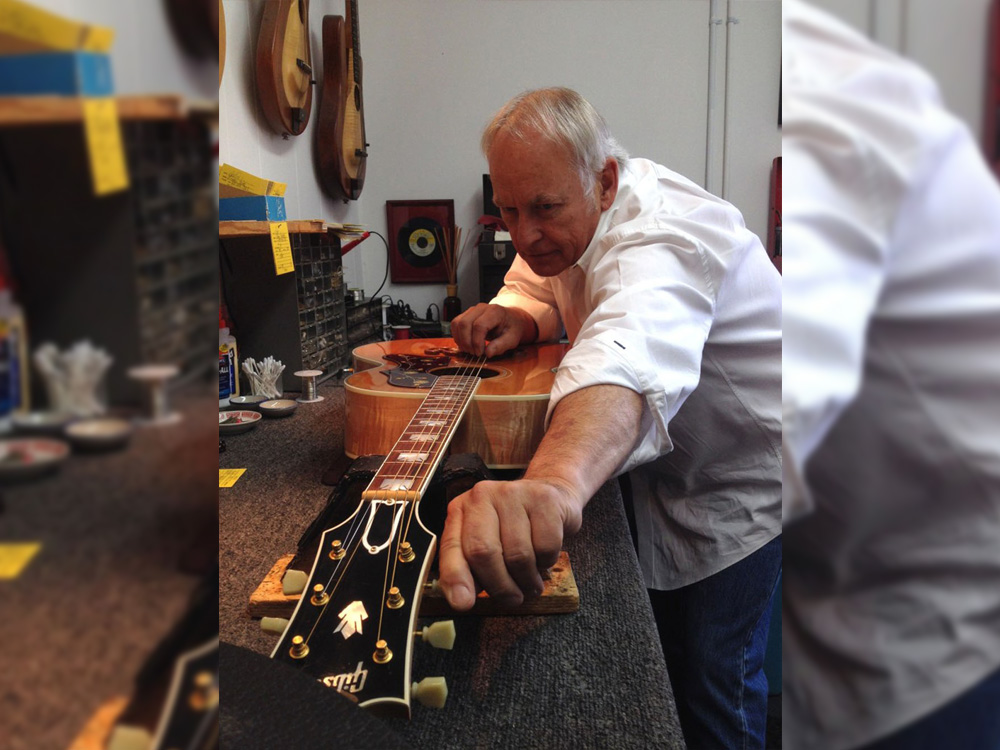 I was born during the middle of the worst blizzard on record in Nashville, Tennessee on December 1950. Still, all of my relatives had to get to the hospital somehow to see me.

My uncles all loved Country or Western music, especially the pedal steel guitar. I was more interested in Chet Atkins and Merle Travis and those big Gibsons and Gretsches they played.

When I was 10 years old, I got one of those crystal radio sets. I tuned in to the pop stations WKDA, WMAK, and the R&B stations WVOL and WLAC. On many nights, I went to sleep with that earplug cranking, just waiting for my favorite song “Apache!”

All of my friends played as kids while I would come home from school and watch those country music shows on TV featuring Bobby Lord, Eddie Hill, Porter Waggoner, and Ralph Emery. Besides Chet and Merle, there was Hank Garland, Jim Colvard, Jimmy Capps, Don Rich, and Grady Martin. Later came Reggie Young, Dale Sellars, Brent Mason, and Mac Gayden.

At age 15, I started playing professionally. I was making money and could afford to buy guitars, motorcycles, and hamburgers. The most popular music store in town was Hewgley’s located on Commerce between 7th and 8th. Any Saturday, you could see Chet Atkins, Jimi Hendrix, or Duane Allman at that store. During that time, I was playing a Gibson 335 model through a Fender Twin Reverb. I loved the Les Paul guitars, but they were just too heavy. Afterward, I had a chance to buy a 1961 Les Paul SG (fretless wonder, white, 3 gold pickups) from my brother’s bass player for $300. That guitar was probably my all-time favorite.

In 1968, I was invited to the newly opened Woodland Sound Studio in Nashville to record and meet a band from Cincinnati. The guitarist with that band was a guy named Seymour Duncan. He immediately became a big influence on my style.

In 1970, my band was lined up to tour New England, playing for the Mafia in towns like Boston, Providence, Pawtucket, Newport, Block Island, and North Attleboro, MA. We were in Providence when we went out for breakfast after the show, and somebody broke into our bus and stole that Les Paul SG. I was destroyed. I called the club owner, and he said he could get it back when they tried to fence it.

Meanwhile, I was to go see Sylvio DiPippo at his music store in town and pick out something to play. All he had was a Fender Stratocaster to take to the gig that night. After two weeks, I got used to that Fender. Later, when I got my first Marshall stack, those weak pickups somehow didn’t seem to matter anymore.

I began my work on custom instruments in 1974 when I met Bill Lawrence. He had just been relocated to Nashville from Michigan and was in the process of setting up the new Gibson Guitar factory. We were constantly going over previous designs and redesigning the latest test models for Gibson through Lawrence Sound Research and our custom shop.

Several versions of pickups were released, including the first soundhole acoustic/magnetic pickup: the L-90 and L-280 for Stratocasters and the L-500 for Gibsons. We went ahead with full-scale guitar designs and brought in Tom Holmes to help with production. I took over the in-house shop doing custom modifications and installations.

In 1976, I left to start my own custom shop. My shop was right across the street from the Musician’s Union, and I had most of the repair and custom work from the Nashville area professionals as well as the local music stores. Some of my notable clients include Chet Atkins, Grady Martin, Neil Young, Waylon Jennings, and Willie Nelson, just to name a few.

After many years of building guitars, playing in bands, and touring the country with Waylon Jennings and The Crickets, I packed up and moved to Los Angeles in 1984. I moved into a house and built a studio with my good friend Dallas Taylor. We were writing and recording songs for years. In 1987, Fred Walecki asked me to help him with guitar repairs for Westwood Music. Soon, we had the good fortune of bringing in Rick Turner to work with us. Rick is best known for his work with the Alembic Guitar Company in the early 70s, as well as the popular Rick Turner Guitars of today. Every day was a party working with Rick Turner.

During this period, I also hooked up with Robin Whittle of Real World Interfaces in Melbourne, Australia and helped him market his wonderful modifications to the Roland line of synthesizers here in the U.S. I already had my degree in electronics, so I did all of the circuitry modifications. These mods were a complete circuitry redesign and hardware upgrade to the Roland line up. Our mods to the MT-32, D-110, D-10, and D-20 have been very successful worldwide.

Neely Guitars has evolved over the last 40 years. It incorporates my many years of professional guitar playing with the wonderful designers and musicians I’ve been able to work with. My years in college studying electronics, architectural drawing, photography, and computers have blended with years of building guitars to aid in the designs of my own line of instruments. My NepTune interval correction has been installed on over 400 guitars as an aftermarket modification and is incorporated in every acoustic or electric guitar that I build. 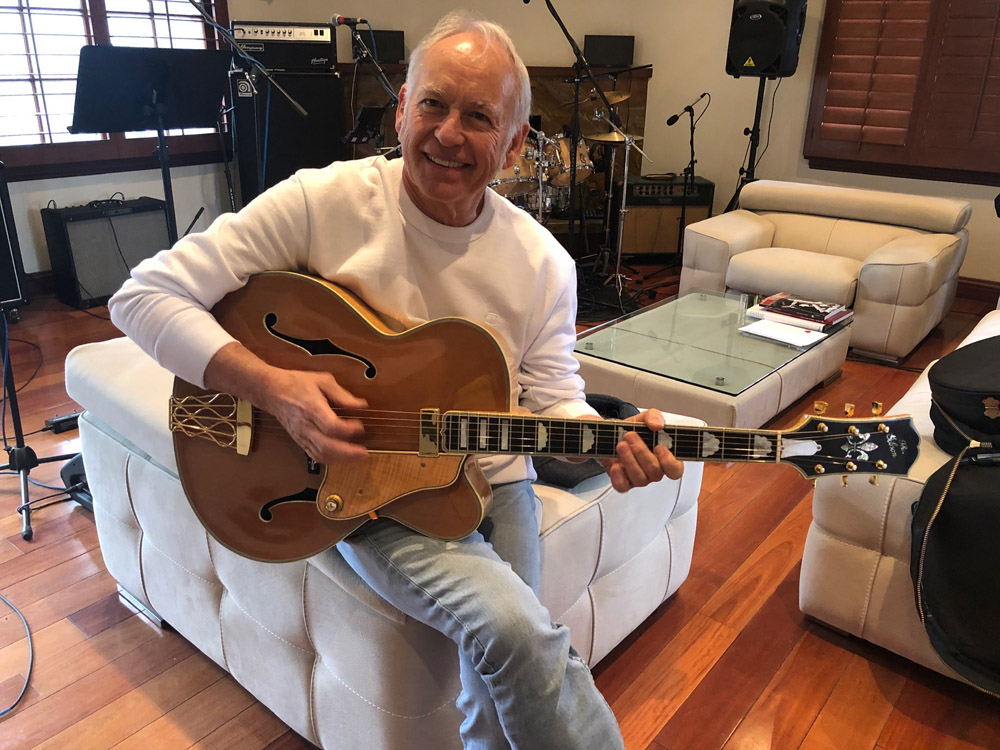 Country music always reminds me of the barbershop. Although it was my first influence, I always enjoyed R&B more, with guys like Chuck Berry and Little Richard. Nashville had a large R&B community with clubs, record labels, and television.

On channel 5, Night Train comes up every Saturday night at 12:00 AM. Noble B. Blackwell hosted that show. It started with a full quart of Sterling Beer on the desk and as the show progressed, the bottle emptied. The house band was The King Kasual band with Johnny Jones on lead, Billy Cox on bass, Ring Brown on drums, and Jimi Hendrix on rhythm. Hendrix actually played a Telecaster upside down, while Johnny Jones played lead on a Gibson 335.

Early on, my bands were playing R&B because I liked to make the people dance. I would get in real close with my drummer and bass player and concentrate on that power to move people. A guy named Tant Dowell lived in my neighborhood. His band, The Monsters, was Nashville’s finest. Although he was a couple of years older than I was, he let me into their rehearsals because they were always borrowing my gear.

Even though I was underage, my friends Jimmy Lewis and Blanton Wooten could get me into the Briar Patch and hear The Allman Joys. Damn, they were good! They were also funny.

Then in 1964, those clever Brits were imitating a lot of our R&B and doing a great job. A whole wave of British bands came along. In Memphis, there was that whole Stax thing going on, and I just loved it. There was Wilson Pickett, Albert King, The BarKays, The Memphis Horns, Elvis, and all that good barbeque.

Motown was delivering the absolute best-formulated R&B sound, and I was just enthralled by The Supremes, Stevie Wonder, The Four Tops, and The Temptations. Phil Spector was making “The Wall of Sound” records with Martha and The Vandellas, The Ronettes, et al, and I just loved it all. Then, the Beatles did Sgt. Pepper and the whole world changed.

Jeff Beck, Jimi Hendrix, Jack Bruce, and Stephen Stills were my main musical influences. They had musical integrity. Not only were these guys great guitarists, but they were great arrangers, songwriters, and producers.

Back in 1968, my playing was starting to peak, and everybody wanted to know how I did it. I was reluctant to show anyone, figuring they could do better by working at it as I did.

There was a kid who was friends with my schoolmates. He showed up at one of our rehearsals. Off in the corner, I heard him playing and though he had only been playing a couple of months, he was good. I said, “Hey Stanley, you’re getting pretty good, let me show you some stuff.”

I showed him how to do basic pentatonic shapes, as well as how to play through majors, minors, and the grace notes that went with it. He went home and locked himself in his room for six weeks. When he came out, he could just blow me away. He was a natural. Stan Lassiter still lives in Nashville, and he became my teacher.